On New Year’s Eve, the tenth anniversary of her mother’s death, Jane McDermott wrote one hundred words for her.

“It was hugely comforting to do that,” she says. “It’s this little thing I can do, and I feel safe doing it. I can write a hundred words for her, and try to capture what a pain in the ass she was and how much I loved her.” 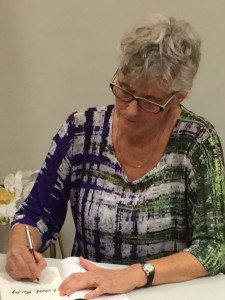 The “little thing” that Jane does is now her first published book, Look Busy. It’s a collection of one hundred one-hundred word stories.

In turn, it’s dark, comical, surprising, cynical, poignant, and philosophical. She’s tagged it as “by and for the easily distracted.”

But although Jane has had some success getting short stories published, she didn’t set out to write a collection. At the time, she wasn’t writing at all.

“I’d been writing stories since I was a little kid and then ended up as a marketing manager,” she says. “That became a soul-sucking shit show and I couldn’t do any more creative writing.

“Then one day I was thumbing through the back of Poets & Writers magazine, and there was a call for a one-hundred word story.”

Jane grasped the idea like a lifeline in the ocean. This was something she could do.

“The writing of these stories was the road map to writer redemption for me.”

Jane sent the story collection to publishers but received a number of rejections. Each time, she’d tweak the stories and send them out again.

Finally, and hesitantly because she wasn’t sure it was a fit, she entered the collection for the Michael Rubin Book Award at San Francisco State, where she’s working on her MFA. She thought the judge might relate to her quirky style. He did; she won.

“I was flabbergasted,” she says.

“I’d been blown away by the quality of the writing in the MFA program. So it was very humbling to actually win this award. But the moment of grace, if you will, has been how gracious everyone has been to me. It’s a very supportive writing community. Everybody has been fantastic.”

Fewer words, more liberation
In the editorial process, the one thing that changed dramatically was the order of the stories.

“I hadn’t given that the greatest amount of thought,” Jane says. “Then I realized how critical it was—that many of the stories inform each other.”

And when I ask her about the constraint of writing a story in one hundred words, she tells me it’s “curiously liberating.”

“I thought it would be confining,” she says. “But I found both safety and freedom in the conceit.

“Then I became fascinated with how far you can take it and what you can actually accomplish with a hundred words.”

It seems it’s liberating for the reader too. People have told Jane that they keep thinking about what she calls the little snippets she’s created. They build new scenarios for the characters.

“I love the concept of people sitting on a subway, and they’ve read a story and the book is open, and God knows where they’re taking these characters just on the basis that I’ve launched them into this little reverie.”

But it seems that if readers want to follow the characters beyond the stories in Look Busy, they’ll have to do that themselves.

Despite the one hundred words she wrote this New Year’s Eve for her mother, Jane is moving away from the format—she’s working on two novels—and has no intention of writing one hundred one-hundred word sequels to her stories.

Look Busy by Jane McDermott was published by Fourteen Hills Press in November 2014. You can find it on Amazon here, or through the Small Press Distribution here. You can learn more about Jane here.

Roz Kay is a writer and former journalist. Her debut children’s novel, THE KEEPER OF THE STONES, was published in 2020 by Hayloft Publishing. Her debut novel for adults, FAKE, (contemporary fiction) was published in September 2020 by her own imprint, Darley Press. Roz's short fiction has appeared under the name Roz DeKett in Fish Publishing’s 2017 Anthology, The Nottingham Review, The York Literary Review, and the Bedford International Writing Competition’s 2018 Anthology. She has also appeared as Roz Kay in the American children’s literary magazine, Cricket. As a news journalist, Roz worked for The Journal in the North East, the Liverpool Echo, and BBC local and national radio. She is a graduate of the University of Leeds and lives in Wiltshire.
View all posts by Roz Kay →
This entry was posted in Author interviews, Fiction and tagged author, Fiction, Fourteen Hills Press, Jane McDermott, Look Busy, MFA, Michael Rubin Book Award, Roz DeKett, Roz Kay, San Francisco State, short stories, Small Press, The Right Word. Bookmark the permalink.