The kind of stories that bring us together: Dorothea Benton Frank

“I think we’re all kind of in the same boat,” says Dorothea Benton Frank. She’s talking with me about her readers and her new novel, All the Single Ladies, published in June by William Morrow.

“We’re dealing with aging parents, or children getting married, or belligerent teenagers, or unpleasant in-laws. We worry about money, we worry about aging, we worry about our health, about the people around us. So all those kinds of stories bring us all together to begin with.”

The novel, Dottie’s sixteenth, tells the story of nurse Lisa St. Clair and her new friends Carrie and Suzanne, brought together by the death of one Lisa’s patients. It sparks a series of events, challenges, and life changes for the trio, all set in the steamy southern atmosphere of the Carolina Lowcountry.

They’re universal themes shown through the lens of Dottie’s world.

“They absolutely are universal,” she says. “I write about the south and I place my stories in the south because I’m from the south, and that’s what I know. It’s really not necessary to the story but I want to place the story there strongly, so that you’re deeply rooted in it.

“And there’s nothing like hundred-degree weather to deeply root you somewhere!”

One of the themes in All the Single Ladies is the controversial topic of legalizing marijuana. Like many authors, Dottie uses writing as a way to research and discover something new and in her case, explore a topic that might be of interest to her readers too.

“It’s something that I don’t understand,” she says.

“So, I’m not taking a position on it one way or the other, I’m just opening the door on the conversation.”

You can’t fix a blank page
Dottie’s output is significant—a book a year, 16 of them to date. 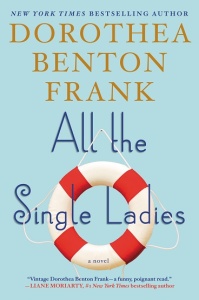 But fun or not, it still takes discipline and structure. “I get up and get dressed and I go to work like everybody else,” Dottie says.

“I work in my house, but I work every day from 10 to two, minimum. If I’m writing on deadlines I may work from 10 o’clock in the morning till 10 o’clock at night if I have to. But mostly I find that the good writing is inside of a short number of hours, because after that you start to putter along and the quality of the writing is just drivel.

“Although that’s not the worst thing in the world either, because you can fix drivel. You can’t fix a blank page, but you can fix a badly written page.”

Dottie’s work ethic means writer’s block never has a chance. And she has some techniques to make sure she stays on track.

“I never finish a chapter and then leave a blank page till the next day,” she says.

“I always set up the next chapter and make a few notes about what I want to happen in that chapter, and then I end my day. Because, otherwise, I come in in the morning and I fiddle around for an hour.”

Setting up the next chapter also gives Dottie’s mind time to turn things over as she goes about errands and the rest of her day, so, she says: “You go to work ready to go to work.”

Finally, she uses an outline. When I mention that the last author I interviewed, Ellen Sussman, never outlines when she writes, Dottie is almost speechless.

“I don’t know what to say about that,” Dottie says. “I couldn’t sleep at night if I didn’t know where I was going.

“An outline is not something carved in stone, but it just gives you a framework to work in. It’s like a map, so you know where you’re going. You can control the arc of your story.”

Which just goes to show that while writing has rules, you can pick the ones that work for you and break the others.

Doughnuts and jokes
While Dottie tackles big themes that affect her readers, she likes to sprinkle her writing with humor. Doughnuts also have a place in All the Single Ladies. And her inspiration is all around her.

“But, you want to take those issues to a level of entertainment for your reader and give them things to think about and talk about, so there’s some takeaway value from the story, it’s not just a story.”

It’s clear her readers love her; Dottie was coming to the end of a successful book tour when we spoke. And it’s reciprocated.

“My readers are the classiest, coolest women on the planet,” Dottie says. “You should see them. Even at the beach, they come in and their hair looks good, they’ve got a cute sundress. It’s just really very nice. I love them.”

Nonetheless, book tours can be stressful. Travel is long, with airport delays or traffic issues. And then there’s the strangeness of suddenly being out in the spotlight with the new book.

“You work in isolation, under a rock for most of the year,” Dottie says.

“And then, you come out and it’s like having a baby. You just hope everyone likes your baby.”

You can follow Dorothea Benton Frank on her Facebook page here and on her web site here.

All the Single Ladies was published on June 9, 2015 by William Morrow, and is available as a hardcover or an ebook.

Roz Kay is a writer and former journalist. Her debut children’s novel, THE KEEPER OF THE STONES, was published in 2020 by Hayloft Publishing. Her debut novel for adults, FAKE, (contemporary fiction) was published in September 2020 by her own imprint, Darley Press. Roz's short fiction has appeared under the name Roz DeKett in Fish Publishing’s 2017 Anthology, The Nottingham Review, The York Literary Review, and the Bedford International Writing Competition’s 2018 Anthology. She has also appeared as Roz Kay in the American children’s literary magazine, Cricket. As a news journalist, Roz worked for The Journal in the North East, the Liverpool Echo, and BBC local and national radio. She is a graduate of the University of Leeds and lives in Wiltshire.
View all posts by Roz Kay →
This entry was posted in Author interviews, Fiction and tagged All the Single Ladies, author, Dorothea Benton Frank, Fiction, HarperCollins, interview, Lowcountry, New York Times bestseller, novel, Roz DeKett, South Carolina, Sullivan's Island, William Morrow, writer, writing. Bookmark the permalink.