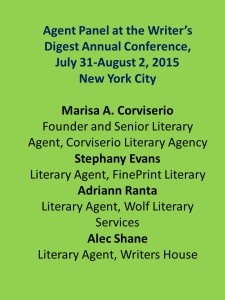 Pitch slams
Let the passion you have for the book shine through. Tell them what it’s about, what the main character goes through, what happens at the end. They need to know this to get interested in reading it.

If you’re treating it like a query, you’re wasting the opportunity for a dialogue. Agents want to have a conversation.

Don’t try to give a synopsis of the plot. It’s very obvious if you’ve memorized a synopsis.

If you’ve written a memoir, they want to know what makes it unique and interesting.

Things they’re tired of seeing in opening chapters
Lots of eye-rolling here from the panel! These are things they see “over and over again.”

They don’t want to feel manipulated by the first chapter (nor does the reader). They do want to see something they’ve never seen before. (If only we knew what that is!)

The importance of platform
If you’re a non-fiction author and you don’t have a platform, your book won’t sell. You don’t need one for fiction—but it will only help you. It helps with genre fiction in particular, especially in the romance and young adult communities, which are very strong and supportive of each other.

However, the number of Twitter followers you have doesn’t translate directly to book sales.

Decide what your genre is
Genre niches are so divided. Multi-genre has better luck in digital publishing, because book stores have to know where to shelve books as that’s how print readers buy. Pick one genre and stick with it when you’re describing your book.

Simultaneous queries
These are fine. Agents assume you’re making simultaneous queries. Don’t offer an agent an exclusive, because you’re wasting valuable time for getting your manuscript seen. And when you get an offer, go back and tell the other agents you have one. There’s one exception: don’t send your book to more than one agent at each agency.

What about a prologue?
Maybe. In fantasy, for example, a prologue may work. But you’e effectively writing two openings to your story, and giving an agent two chances to say no. A prologue is often backstory that you can weave into your main narrative.

How agents help you
It’s a business relationship. Many agents edit your book with you, sometimes over several rounds, to help you get it as good as you can make it before the agent starts sending it to acquisition editors. Many do more editorial work now than they’ve ever done before. It’s such a tight market, especially in fiction, that the book has to be close to perfect before it goes to a publisher.

They’re also chasing royalties and helping with marketing, as well as reading all those queries coming in.

Alec Shane said, “Finding an agent is like online dating. You start with an email, they reply, maybe there’s a phone call, and then you’re married all of a sudden.

“Find the person you want to be married to with this book.”

Roz Kay is a writer and former journalist. Her debut children’s novel, THE KEEPER OF THE STONES, was published in 2020 by Hayloft Publishing. Her debut novel for adults, FAKE, (contemporary fiction) was published in September 2020 by her own imprint, Darley Press. Roz's short fiction has appeared under the name Roz DeKett in Fish Publishing’s 2017 Anthology, The Nottingham Review, The York Literary Review, and the Bedford International Writing Competition’s 2018 Anthology. She has also appeared as Roz Kay in the American children’s literary magazine, Cricket. As a news journalist, Roz worked for The Journal in the North East, the Liverpool Echo, and BBC local and national radio. She is a graduate of the University of Leeds and lives in Wiltshire.
View all posts by Roz Kay →
This entry was posted in Writing tips and tagged author platform, fiction genre, first chapter, genre, Literary agent, opening chapter, pitch slam, prologue, Querying agents, WDC15, What literary agents don't want, What literary agents want, Writer's Digest Annual Conference, writing, writing tips. Bookmark the permalink.

2 Responses to What literary agents want … and don’t want