Sometimes you need to do something different: Kate Ellis 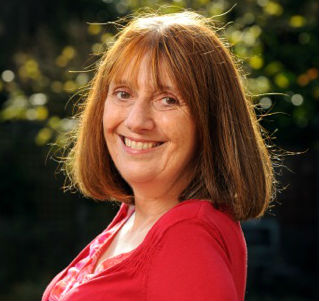 Kate Ellis is nothing if not prolific.

The House of Eyes, just published, is the twentieth novel in her Wesley Peterson series of crime novels set in the South West of England. She has five crime novels in another series about Detective Inspector Joe Plantagenet, set in Yorkshire. She’s just finished editing the fourth draft of next year’s Wesley novel. The first book in what might be a new trilogy will be out later this year. And she also writes short stories.

“I’m writing one at the moment,” Kate tells me.

The continuing success of Kate’s main longest-running series, the Wesley Peterson novels, lies partly in how she ties in present-day crimes with archaeological mysteries. Wesley, a Detective Inspector, has an archaeology degree and his best friend Neil Watson is a local archaeologist.

It’s also partly in the development of her characters and their personal stories. Wesley’s marriage isn’t totally perfect and there’s always the suggestion of something with another regular character.

We become familiar with the hopes and disappointments of his friends, colleagues, and family members in the series.

I asked Kate how, as a white woman, she came to create a main character who’s a black man.

“Quite easily I think,” she says. “I’ve got a friend from Trinidad and I think her family are quite similar to Wesley’s, a medical family, very well-educated.

“He almost appeared fully formed. He’s a character I really like. He’s one of the good guys.”

Choosing sand over grit
Wesley and his Liverpudlian boss, Gerry Heffernan, track down their killers in and around the town of Tradmouth. No great leap of the imagination is required to recognize the English town of Dartmouth with its surrounding Devon towns and villages. Totnes becomes Kate’s New Age town of Neston; her Morbay is inspired by Torbay and Torquay, with the addition of a rough housing estate.

So how did a Northern writer (Kate is from Liverpool, studied drama at Manchester University, and lives in the Greater Manchester area) settle on the leafy lanes and beautiful beaches of Devon for her crime novels?

“I didn’t particularly want to write about the gritty inner city,” Kate says. “And if you write about a northern city, [publishers] want it really gritty.

“I knew South Devon really well. We’d been visiting there since the 1980s, and we’d got to know people, got to know the area, and it’s an interesting area. So using different names, I can use my imagination and change things around.

“And also the place has a lot of history. It’s a very interesting area, full of possibilities.”

Those possibilities were very important to Kate in finding a location that would meet her two passions: history and crime.

The first book she wrote was a crime novel set in Tudor Liverpool. But when she began sending that out, agents told her that while they liked it, the market was saturated with Medieval and Tudor crime novels—Kate laughs.

“So, I hit on an idea,” she says. “I’d write a present-day crime, which I’d always intended to do anyway, and have a historical case in the background. The Merchant’s House was the first one that was published.”

That was in 1998, and Wesley Peterson had his first case. 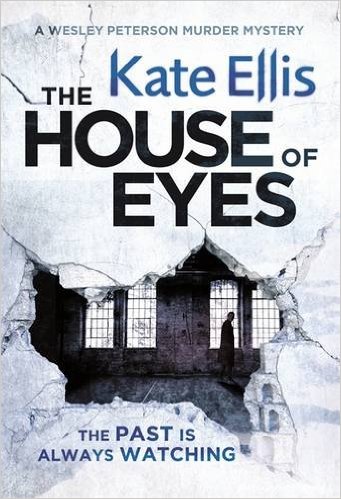 Doing something different
While steadily producing a Wesley Peterson book a year, Kate has also published five novels about Detective Inspector Joe Plantagenet. The idea for those was sparked by a visit to York, where Kate’s son was studying for an archaeology degree. (She’s also a member of an archaeology group; apparently it runs in the family.)

During the visit, Kate took a guided tour of York, said to be one of the most haunted  cities in the country. Inspired by one of the ghost stories, Kate wrote her first Joe Plantagenet novel.

“Sometimes you need to do something different,” Kate says. “I got so many ideas.” The ghost stories continue to fuel that series.

Obviously, writing is a full-time job for Kate.

Kate writes up to two books a year as well as short stories. Next up is another departure, A High Mortality of Doves, which will be out in November. Kate has returned to historical crime, setting the story in Derbyshire in 1919. It’s a stand-alone novel but she has plans to develop it into a trilogy. And The Devil’s Priest, the Tudor mystery set in Liverpool that was the first novel she wrote, is now available on Kindle.

So will she keep going with Wesley after his twenty-first book next year?

Whatever she writes next, Kate always has one goal in mind for her readers.

“That they’ve read a really good book,” she says. “A really good mystery, and the end’s come as a surprise.”

About the Author
Kate Ellis was born in Liverpool and she studied drama in Manchester. She worked in teaching, marketing and accountancy before first enjoying writing success as a winner of the North West Playwrights competition. Crime and mystery stories have always fascinated her, as have medieval history and archaeology which she likes to incorporate in her books. She is married with two grown up sons and she lives in North Cheshire, England, with her husband.

Kate’s novels feature archaeology graduate Detective Sergeant (later Inspector) Wesley Peterson who fights crime in the “mean streets” (or should it be “mean lanes”?) of South Devon. Each story combines an intriguing contemporary murder mystery with a parallel historical case. She has also written five books in the spooky Joe Plantagenet series set up in North Yorkshire as well as many short stories for crime fiction anthologies and magazines. Kate was elected a member of The Detection Club in 2014. She is a member of the Crime Writers Association and Murder Squad. Kate is currently working on her twenty-first Wesley Peterson novel.

The House of Eyes was published in February 2016, by Piatkus.

You can learn more about Kate and her writing on her web site here. Follow her on Twitter here.

Roz Kay is a writer and former journalist. Her debut children’s novel, THE KEEPER OF THE STONES, was published in 2020 by Hayloft Publishing. Her debut novel for adults, FAKE, (contemporary fiction) was published in September 2020 by her own imprint, Darley Press. Roz's short fiction has appeared under the name Roz DeKett in Fish Publishing’s 2017 Anthology, The Nottingham Review, The York Literary Review, and the Bedford International Writing Competition’s 2018 Anthology. She has also appeared as Roz Kay in the American children’s literary magazine, Cricket. As a news journalist, Roz worked for The Journal in the North East, the Liverpool Echo, and BBC local and national radio. She is a graduate of the University of Leeds and lives in Wiltshire.
View all posts by Roz Kay →
This entry was posted in Author interviews, crime fiction, Fiction, Historical fiction, Uncategorized and tagged A High Mortality of Doves, author, crime fiction, Dartmouth, Devon, interview, Joe Plantagenet, Kate Ellis, Manchester University, Roz DeKett, Roz Kay, The Devil's Priest, The House of Eyes, The Merchant's House, The Right Word, Tradmouth, Wesley Peterson. Bookmark the permalink.

2 Responses to Sometimes you need to do something different: Kate Ellis