Something exciting and engaging: Dharma Kelleher 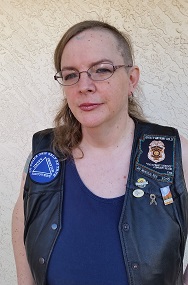 A quote from the great American novelist Toni Morrison circulates often on the internet, at least among writers: “If there’s a book you really want to read but it hasn’t been written yet, then you must write it.”

And writing the book she wanted to read is how Dharma Kelleher achieved her first published novel, Iron Goddess.

The thriller, just released by the Random House digital imprint Alibi, is set in the gritty world of outlaw biker gangs. And there’s a twist: Shea Stevens, the main character, is a lesbian.

But the point of the story is not that she’s gay; it’s simply part of who she is.

“You read a Jack Reacher novel, it’s not centered around his romances,” Dharma says, with a grin.

Dharma came out of the closet many years ago and read a lot of lesbian fiction. She found it fell into just a few categories.

“So much of lesbian fiction is coming out stories, and once you’ve read a few of those you’re like okay, I’ve been there, I’ve lived it, I don’t need to go there again,” she says. “And [there are] romances, which are great; erotica; and then there’s lesbian murder mysteries.

“There wasn’t really anything beyond that in scope. Straight fiction runs the whole gamut, all kinds of different stories.

“I couldn’t find the stories I wanted to read, so I decided to write one myself.”

The result is a story with diverse characters (sexually and racially) headed by Shea Stevens, “biker royalty” with a prison record and an investigative mission that she doesn’t trust to the police.

So how did Dharma arrive here, winding her way through a succession of careers from journalism (“I hated it”) to programming to being a goldsmith to writing a thriller?

She’d always been a writer, and almost ten years ago took part in NaNoWriMo, the annual one-month national event to give writers the inspiration to finish a 50,000 word manuscript.

With that under her belt, she started to work at learning the craft of writing, and over the years she’s written a few “practice novels.”

Falling for the culture
Serendipity brought bikers into Dharma’s life.

“I discovered motorcycles about seven years ago,” she says. “My wife had motorcycles long before and for the first time in our relationship, she got a new motorcycle.

“I rode on the back a few times and after I got over the initial shock and fear, I really enjoyed it. And then I decided I wanted a bike of my own, because being on the back, the seats are uncomfortable and it’s hard to see what’s up ahead.

“So I took a class and got my certification. And I fell in love with the culture.“

“There’s so many different aspects of the culture that I love,” she says. “Sons of Anarchy is really popular and I think it’s really well-written. Kurt Sutter does a beautiful job bringing out the humanity of the characters even though they’re basically outlaw bikers.

“So part of it was I wanted to show the outlaw biker world from a female point of view. And not even from the point of view of what’s called an old lady, which is the partner of an outlaw biker, but someone who’s a little more removed from that.

“That was the inspiration for the main character, Shea Stevens.”

Absolutely determined
But it’s one thing to write something different from what’s already out there, and another to get it published.

Dharma began the long slog through querying agents. She estimates she contacted around ninety.

“Which sounds daunting,” she says. “Four of them asked for more. But that also means eighty-six of them said no, it’s not right for us.

“After a while, I got to a point where I was sending out one query a day. Just one a day, and not worrying about the results.

“I was just determined to get it out there. I was absolutely determined. I really believed in the story.”

Eventually Dharma landed an agent, who in turn began pitching the novel to publishers. Feedback was great—they loved the story, the characters, her understanding of the biker world.

“What it came down to is the characters are very diverse racially and sexually,” Dharma says. “The main character is a lesbian, there’s a lot of racial diversity, and despite the fact that publishers keep saying they want more diversity, when it comes down to it they don’t know how to market it.”

Finally, Alibi made an offer of a two-book digital deal.

“And Alibi has been absolutely wonderful,” Dharma says.

Next steps
“I still wish I had a physical book that I could go out and do signings on,” Dharma says.

“We have a really great bookstore in town called the Poisoned Pen, but I can’t go down there and do a signing because I’ve got nothing to sign.”

But print could come later, and meanwhile, she’s thrilled to be a debut author.

“I’m really excited about having the opportunity to get my story out,” she says.

Especially when you’ve written the book you really wanted to read.

Iron Goddess was published by Alibi on June 28, 2016, and is sold by Random House for Kindle here.

About the author
Dharma Kelleher writes gritty tales about outlaws, renegades, and misfits. A former radio news director, she now works as a freelance editor. Her hobbies include riding motorcycles, getting inked, making snarky comments on Facebook and Twitter, and shocking people with her latest haircut. She lives near Phoenix with her wife. You can learn more about Dharma and her writing here at dharmakelleher.com.

Roz Kay is a writer and former journalist. Her debut children’s novel, THE KEEPER OF THE STONES, was published in 2020 by Hayloft Publishing. Her debut novel for adults, FAKE, (contemporary fiction) was published in September 2020 by her own imprint, Darley Press. Roz's short fiction has appeared under the name Roz DeKett in Fish Publishing’s 2017 Anthology, The Nottingham Review, The York Literary Review, and the Bedford International Writing Competition’s 2018 Anthology. She has also appeared as Roz Kay in the American children’s literary magazine, Cricket. As a news journalist, Roz worked for The Journal in the North East, the Liverpool Echo, and BBC local and national radio. She is a graduate of the University of Leeds and lives in Wiltshire.
View all posts by Roz Kay →
This entry was posted in Author interviews, crime fiction, Fiction and tagged Alibi, author, biker, crime fiction, Dharma Kelleher, digital print, Fiction, gay, interview, Iron Goddess, Kurt Sutter, lesbian, LGBT, motorcycle, NaNoWriMo, novel, outlaw, Penguin, Phoenix, Poisoned Pen, Random House, Roz DeKett, Roz Kay, Shea Stevens, Sons of Anarchy, The Right Word, thriller, writer. Bookmark the permalink.