The Keeper of the Stones

Imagine starting to write a book in 1987. Finishing it in 1995. Having interest from publishers, but not getting a bite. Imagine it sitting on various hard drives until more than 20 years later, you open the file, rewrite it from top to bottom, and start looking for independent publishers who might consider it.

Then, in the midst of a Twitter discussion on writing in 2017, imagine an independent publisher tweets a reply to you: “Why haven’t you sent me a manuscript?”

And a few weeks later, your book is accepted. 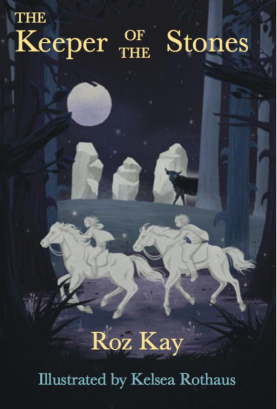 That’s how The Keeper of the Stones found a home, and it’s now due out in March 2020 from Hayloft Books.

I’m proud that it’s essentially the work of three women: me as the author, Dawn Robertson as the publisher, and the amazing Kelsea Rothaus as the illustrator. (And despite being an American in her twenties, Kelsea somehow captures the magical, dark edge in the story that to me is straight from the heritage of English and European fairy tales, from the Brothers Grimm to Alan Garner, elevating the book with her illustrations.)

I’ve had a lot of help along the way, notably from my first writer’s group which consisted of published and unpublished children’s authors and from membership of the SCBWI.

Even with some short stories published, it’s an incredible thing to have my first book published at the age of 59. My first in several ways: first novel, first children’s novel, first novel I wrote – I’ve written a few and and am on the first draft of my third, contemporary adult fiction in that case, yet to be published …

There’s a sequel in the offing for The Keeper of the Stones and I’m hoping this time it won’t take thirty years.

You can order The Keeper of the Stones here

Roz Kay is a writer and former journalist. Her debut children’s novel, THE KEEPER OF THE STONES, was published in 2020 by Hayloft Publishing. Her debut novel for adults, FAKE, (contemporary fiction) was published in September 2020 by her own imprint, Darley Press. Roz's short fiction has appeared under the name Roz DeKett in Fish Publishing’s 2017 Anthology, The Nottingham Review, The York Literary Review, and the Bedford International Writing Competition’s 2018 Anthology. She has also appeared as Roz Kay in the American children’s literary magazine, Cricket. As a news journalist, Roz worked for The Journal in the North East, the Liverpool Echo, and BBC local and national radio. She is a graduate of the University of Leeds and lives in Wiltshire.
View all posts by Roz Kay →
This entry was posted in Children's Books, Fiction and tagged Avebury, children's novel, Fiction, novel, Poetry, Roz Kay, stone circles, The Keeper of the Stones, writing. Bookmark the permalink.

2 Responses to The Keeper of the Stones