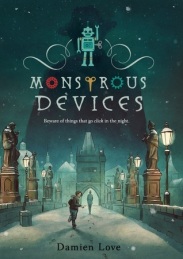 When Alex’s grandfather sends him an old robot out of the blue, the mysterious writing of his English essay while he’s asleep is just the start. Whisked off to Paris and Prague by his grandfather, Alex finds himself galloping at breakneck speed through a secret, magical world where good battles evil, opening up a Pandora’s box of questions including some that challenge even Alex’s own beliefs about himself.

It’s a rattling good read sprinkled with dry humour and memorable characters; his grandfather is larger than life. Publishers Weekly captures it thus: “Raiders of the Lost Ark meets Toy Story” and that’s a fair comment that indicates the blend of whimsy, danger, and adventure.

Damien Love borrows freely (and openly, with tongue-in-cheek references) from an array of fantasy precursors (Frankenstein, King Kong, among others – John Masefield and The Box of Delights came to mind as well for me) but with a deft hand that doffs his hat to them even as he adds his own original spin.

A bonus is some lovely descriptive writing and the great cover illustration and frontispiece by Sam LeDoyen. Thoroughly enjoyable.

Roz Kay is a writer and former journalist. Her debut children’s novel, THE KEEPER OF THE STONES, was published in 2020 by Hayloft Publishing. Her debut novel for adults, FAKE, (contemporary fiction) was published in September 2020 by her own imprint, Darley Press. Roz's short fiction has appeared under the name Roz DeKett in Fish Publishing’s 2017 Anthology, The Nottingham Review, The York Literary Review, and the Bedford International Writing Competition’s 2018 Anthology. She has also appeared as Roz Kay in the American children’s literary magazine, Cricket. As a news journalist, Roz worked for The Journal in the North East, the Liverpool Echo, and BBC local and national radio. She is a graduate of the University of Leeds and lives in Wiltshire.
View all posts by Roz Kay →
This entry was posted in Book Reviews, Children's Books, Fantasy, Fiction and tagged Book Reviews, books, Children's Books, Damien Love, Monstrous Devices, novel, robots, Rock the Boat, Sam LeDoyen, writing. Bookmark the permalink.