Review: The Wizards of Once 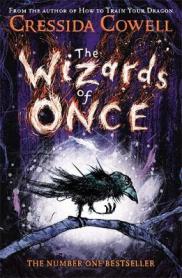 The Wizards of Once – Cressida Cowell

Wonderful galloping tale of Magic, good and evil. Many influences feed into this, from Roald Dahl to Arthurian legend to fairy tales to Shakespeare, and the result, fired by Cressida Cowell’s imagination, is stellar. The chatty, jaunty tone of the “unknown narrator” means the evil bits never get too frightening, and Cowell’s brilliant illustrations perfectly support the story.

Roz Kay is a writer and former journalist. Her debut children’s novel, THE KEEPER OF THE STONES, was published in 2020 by Hayloft Publishing. Her debut novel for adults, FAKE, (contemporary fiction) was published in September 2020 by her own imprint, Darley Press. Roz's short fiction has appeared under the name Roz DeKett in Fish Publishing’s 2017 Anthology, The Nottingham Review, The York Literary Review, and the Bedford International Writing Competition’s 2018 Anthology. She has also appeared as Roz Kay in the American children’s literary magazine, Cricket. As a news journalist, Roz worked for The Journal in the North East, the Liverpool Echo, and BBC local and national radio. She is a graduate of the University of Leeds and lives in Wiltshire.
View all posts by Roz Kay →
This entry was posted in Children's Books, Fantasy and tagged Book Reviews, books, Cressida Cowell, Fiction, magic, novel, review, Roz Kay, The Wizards of Once. Bookmark the permalink.